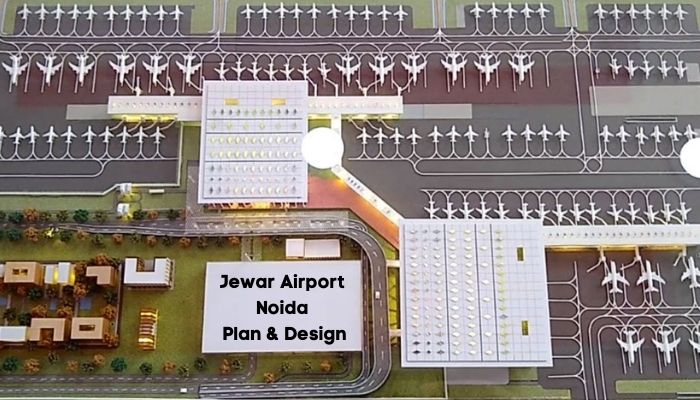 Jewar Airport Noida is being called a game-changer by many politicians and experts. Moreover, the Uttar Pradesh government claims that upon completion, this airport will be the “world’s fourth-largest international airport“.

Have an insight into the map, plan, and design of the Noida International Airport to know why the Jewar Airport project is catching the attention of the people?

According to the Layout Plans provided by “themetrorailguy.com“, the first phase of Noida International Airport consists of the following

Jewar Airport Noida has been planned to be implemented in four phases. The first phase of work is estimated to be completed in the first half of 2024. The Airport will be able to handle around 1.2 crore passengers a year upon completion of the first phase.

The second, third, and fourth phases will see the construction of new terminals, runways, parallel taxiways, and the expansion of cargo terminals. As per “themetrorailguy.com“, the fourth terminal will consist of 1,60,000 sq meters.

The Swiss Airport Company, in November 2019, won the bid to build and operate the Noida International Airport. The reveal of the carbon-neutral design took place in December 2020.

In an interview with NDTV, Nicholas Schenk, the CDO of the Noida International Airport, said that the airport design aims to provide “maximum infrastructure to cover the whole demand of the area.” Furthermore, he called the airport “instagramable” – a new-age term used to describe any place as aesthetic and visually appealing.

So what is it about the design and architecture that makes this airport so attractive?

The Noida International Airport in Jewar is one of the biggest, most awaited projects of the Indian sub-continent and economy.

The efficiency of Switzerland combined with Indian hospitality carries the potential to create a collaboration that will be a class apart.

We hope that the landscapes, green spaces, and ‘instagramable‘ aesthetics combined with powerful operations, passenger capacity of up to 7 crores, and a land area of 5000 acres will inspire other projects.